Tigran the Great, also known as Tigranes II, was the King of Armenia from 95 B.C. until his death in 55 B.C. Tigranes II was born in 140 B.C. and died when he was approximately 85 years old. In around 120 B.C., the Pathians invaded Armenia. The King of Armenia at the time, Artavasdes I, had to give Tigranes as hostage to the Parthians, where he grew up and received an education. 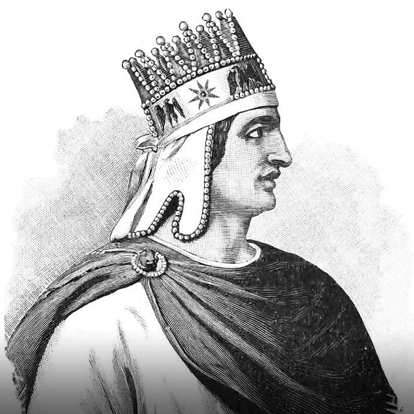 Tigranes II went to school and lived in Ctesiphon. Ctesiphon is a city located 35 kilometers southeast of the modern-day capital of Iraq, Baghdad. It is on the eastern bank of the Tigris river. In either 96 or 95 B.C., the Parthians sent Tigranes to Armenia and appointed him as King of Armenia.

Tigran the Great married Cleopatra of Pontus, and together, they had five children. Marriage between royalty of different nations was a way to show alliance, just like when Tigranes II of Armenia and Cleopatra of Pontus. Similarly, one of their daughters married King Pacorus I of Parthia, and the other daughter married King Mithridates I of Media Atropatene. Tigranes’s remaining children were three sons Zariadres, Artavasdes, and Tigranes. Artavasdes later became the successor to the throne, becoming Artavasdes II of Armenia.

Tigran the Great took the Achaemenid title King of Kings after several victories in the region. During Tigranes II’s reign, Armenia expanded to the largest size it has ever been. It extended from the Caspian Sea to the Mediterranean Sea, reaching the Pontic Alps and Mesopotamia.

Tigran the Great’s son Tigranes fled to Rome and pledged his alliance to the Romans. In 66 B.C., Pompey and his army, along with Tigranes the Younger (Tigranes II’s son), approached Armenia. Tigranes II was around 75 years old, and he surrendered.

After this, Tigranes the Younger was sent to Rome as a prisoner. Additionally, Armenia became an official ally of Rome until the death of Tigranes II in 55 B.C.

Tigran the Great and Hellenism

Tigran the Great was a Hellenistic ruler. He followed Hellenistic traditions and showed his alliance with the Greeco-Roman side through this.

In the past, the presence (or absence) of beards was could show which “side” Armenian Kings were supporters of. Tigranes II had no beard, which pointed out that he was to be associated with Greek culture, rather than Parthian.

During Tigranes II’s reign, silver coins were in use that had images of him with Greek writing on them. These deliberate actions reflect the Hellenistic traditions that Tigranes II chose to introduce and spread during his reign.

The Foundation of Armenia